Originally, the unguarded Illa refuge was a building approximately 35 m long and 6 m deep, one storey, semi-buried, with about 50 beds and one housing for cowherds. This building was built in 2 stages.

Initially, a building smaller than the current one was built to house FHASA workers (Andorran Hydro-electric Forces) during the construction of the dam. In 1993, it was expanded to make it a refuge.

The land is located near the pond of Illa, in the municipality of Encamp. This terrain marks the start of the Madriu-Perafita-Claror Valley on a southwest-facing slope at an altitude of 2,488 meters. The construction and concession of the refuge were taken care of by the Government of Andorra, as part of the measures to improve and develop mountain refuges. It is located at the confluence of the GR11, GR7 and the Coronallacs (the crown of the lakes).

The Madriu-Perafita-Claror valley is a cultural landscape, a joint work of man and nature, exceptional and rich in aesthetic, historical, cultural and environmental values. The valley preserves numerous elements and structures for the exploitation, organization and management of natural resources (forests, pasture, sheepfolds, roads, water, etc.) attesting to the use and evolution of this territory throughout of the history. Of great identity, the valley has become a living testimony of the history and life forms of a rural mountain country. Sites of extraordinary beauty, the result of the interaction of man with his environment.

The main interest of the valley rests on the density of natural and cultural elements of great heritage value, very well preserved, on a relatively small area of 4247 hectares.

In 2004, UNESCO recognized the Madriu-Perafita-Claror valley as a cultural (cultural landscape) as part of the WORLD HERITAGE list in recognition of its exceptional character.

The valley of Madriu-Perafita-Claror is a valley of glacial origin, which drains the largest secondary basin of Andorra. It is secondary to the main basin of the Valira d'Orient and occupies an area of 4,447 ha. It is defined by the Madriu River and its most important tributary, the river Perafita, which unite with Entremesaigües. The Madriu River runs 11.5 km of territory with an average slope of 7.6%. The relief of this area is highly rugged.

The modelling of glaciers resulted in a great variety of conditions and microclimates, caused by the variability of the altitude (with a vertical drop oscillating between 1.055 and 2.905 m) and orientation (great difference between the sunny and the shady area due to the east-west orientation of the main valley). Water also plays an important role in the valley, with many ponds, rivers and streams, small waterfalls, peat bogs and swamps.

The vegetation in the refuge area is unique to the alpine stage (2,200-2,900 m), dominated by pasture, scree and rocky chaos. 99% of the land area of the Madriu-Perafita-Claror valley belongs to the municipality. 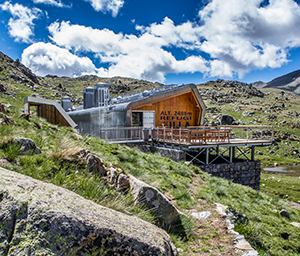 Cancellation policy for reservations in the refuge of L'Illa.

In the case you choose half-board at the last moment (12 hours before the booking date) a 20% surcharge will apply.

Thank you for refraining from cooking and picnicking in the refuge.

Any customer has the right to cancel his reservation made before the date of arrival, in accordance with the conditions that take into account the specificity of the accommodation and the chosen service:

We offer half board (dinner, overnight stay, breakfast and shower)

Guided hikes (reservations by phone +376 872 927 or by e-mail at bookingpasgrau@grandvalira.com)

Horseback riding (reservations by phone +376 872 927 or by email at bookingpasgrau@grandvalira.com)

Hiking trail with overnight: Departure from Grau Roig at 15h00 and climb to the Illa by Pessons, approximate duration: 5 hours. Accommodation at the refuge in half board (reservations by phone +376 872 927 or by email at bookingpasgrau@grandvalira.com )

We offer three BOXES where you can leave your dog in complete safety. Ask and reserve this option by phone or email.